Yesterday most tamil homes celebrated "Puthandu" or what is known as Tamil new year. There are no elaborate poojas or rituals on this festival. Infact, most festivals in tam- brahm homes are simple family ocassions  and is related to simple rituals, feasting and fasting with emphasis on health and discipline( do my tamil blog friends,agree?). For that matter,  most indian festivals are about fasting and feasting.

The tradition of eating only fruits, vegetables and milk on some religious days, the taboo on salt and cereals ensured consumption of a large quantity of fruits and vegetables. Also, no salt for 24 hours would increase the salt sensitivity of the body which will help in progressively decreasing the intake of salt. Less salt means lesser dieseases.

Tradition of making different cereal and food items in different seasons also ensured variety and complete nutrition. For instance, whole bajra was ground and consumed in winter. Sesame seeds were eaten in winter and specifically in the month of January(sankranti). The tradition of making payasam with jaggery, dal and dry fruits and nuts ensured that nuts and essential nutrients were consumed atleast during festivals.

In south india, especially the farming community who work in the fields rely on 'pazheyadu' in summer, which is nothing but fermented leftover rice to which water is added. This is very nutritious and keeps the body cool and energetic in summers.

So many such lifestyle healthy food habits are what goes into some of our traditional and seasonal cuisine.

Yesterday's new year signature dish of "vepampoo Pacchidi" is one such. The two main ingredients that go into the making of pacchidi is mango and neem flowers(vepampoo)which are seasonal. This pacchidi is supposed to contain all the 6 tastes - sweet(jaggery), sour(mango), bitter( neem flowers),salt, spice( chilly) and astringent( asafoetida).

Most of the 4 tastes like sweet, spice, sour and salt are common in our present day cooking. But two tastes that are not dominant in modern cooking are bitter and astringent taste. The non-inclusion of the two tastes are the reason for lifestyle diseases according to S R kishore kumar

He is  a  TV chef who specializes in herbal and native cooking and his programs are very informative.  ( i presume he is a doctor/ doctorate but no clue),I like watching his show which comes with many ancient kitchen and wellness tips and the ingredients he uses for his cooking are locally available but not popular. For instance, even the simple banana heart ( vazhaipoo), Vazhaithandu( banana stem) or moringa leaves  is not popular in my local market while i get all sorts of foreign vegetables and fruits which have travelled from faraway countries. He advises to avoid  foreign vegetables which   are cold-storaged and leave eco foot prints. He insists on substituting horsegram to oats, which has the same quallity of reducing cholestrol and  gives the energy equivalent to that of a horse power. He advises to use honey, palm sugar or palm jaggery to substitute the inorganic sugar.

According to him, people consume more sweets today partying and avoid bitter tastes of neem, bitter gourd, sundakkai (turkey berry/thai brinjal) etc. Similarly the astringent taste present in traditional and native indian vegetables like vazhaipoo( banana hearts), vtender plaintains(  raw, green and tender), pidi karanai ( not elephant foot yam, these are fist sized )  are avoided by people due to both difficulty in procuring as well as the tedious process of making . The irregular intake of such pure healing regional foods, to him  is the reason there is an imbalance in the  constitution of modern generation which leads to diseases like diabetes, BP,  hormonal problems etc. According to him bitter food detoxifies and lightens tissues while astringent(thuvarppu in tamil) present in raw fruits and herbs absorbs water, tightens tissues and dries fats.

He also warns that there is an urgent need to create awareness about the heritage, nutritional and healing value of local food and native vegetables in India to improve its intent beyond village markets. Unless urban consumers buy and money is made from these veggies, they will disappear and so with that beneficial traditional cuisine. 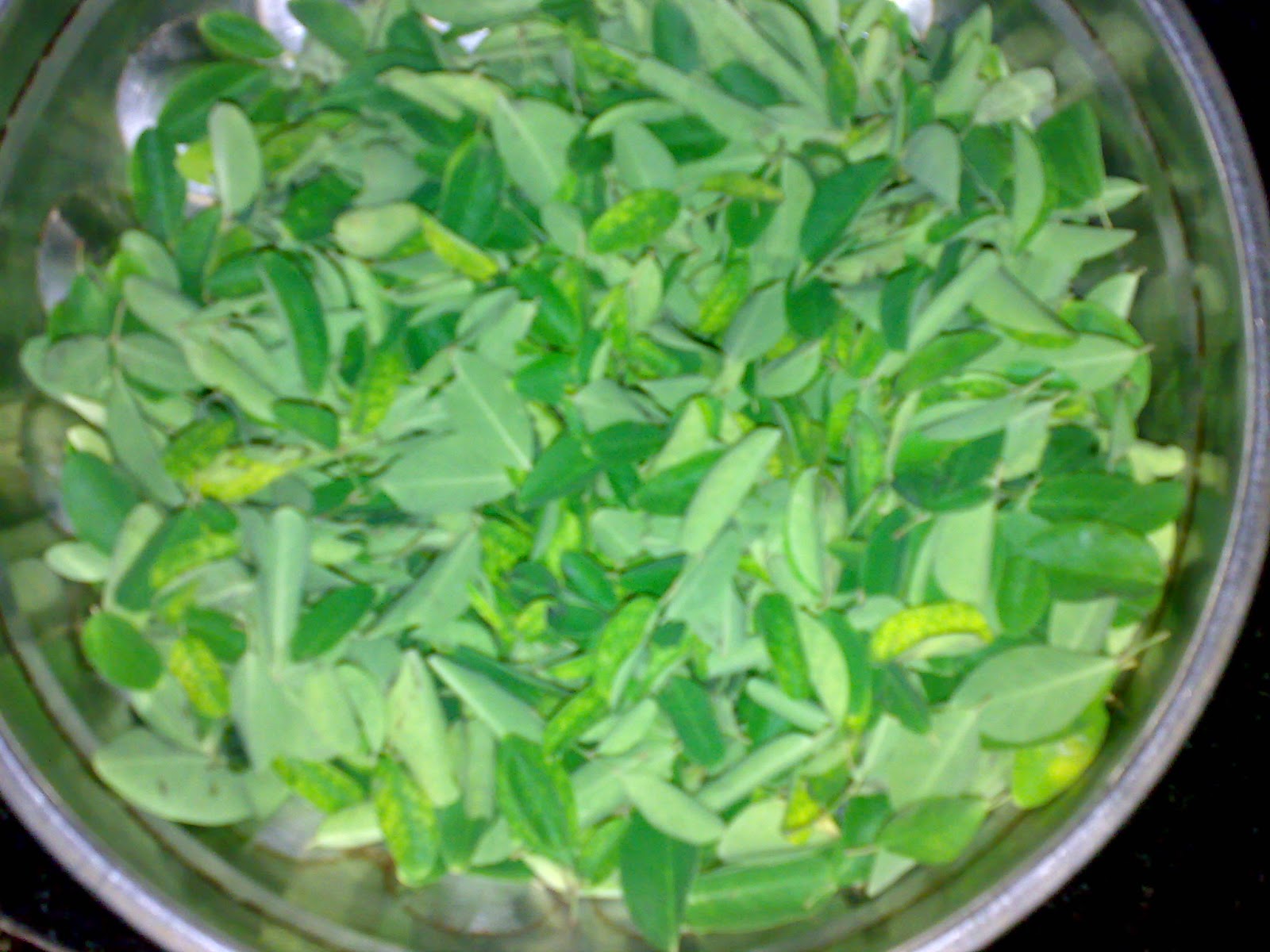 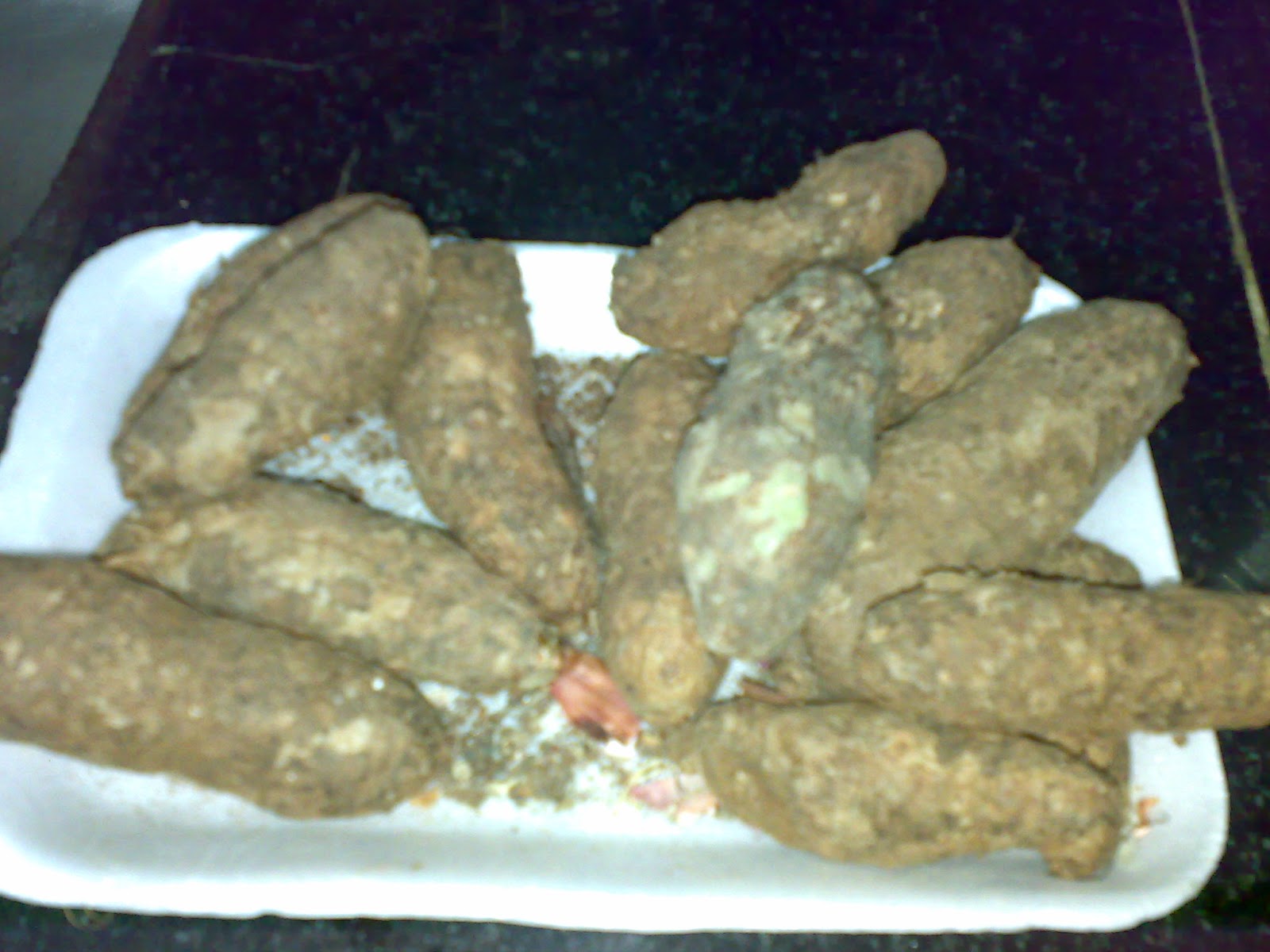 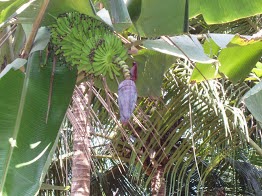 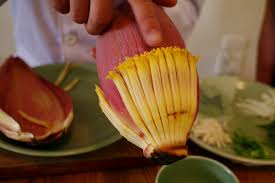 To the left is the banana heart hanging like a pendant, while the right shows the florets covered with purple bracts. 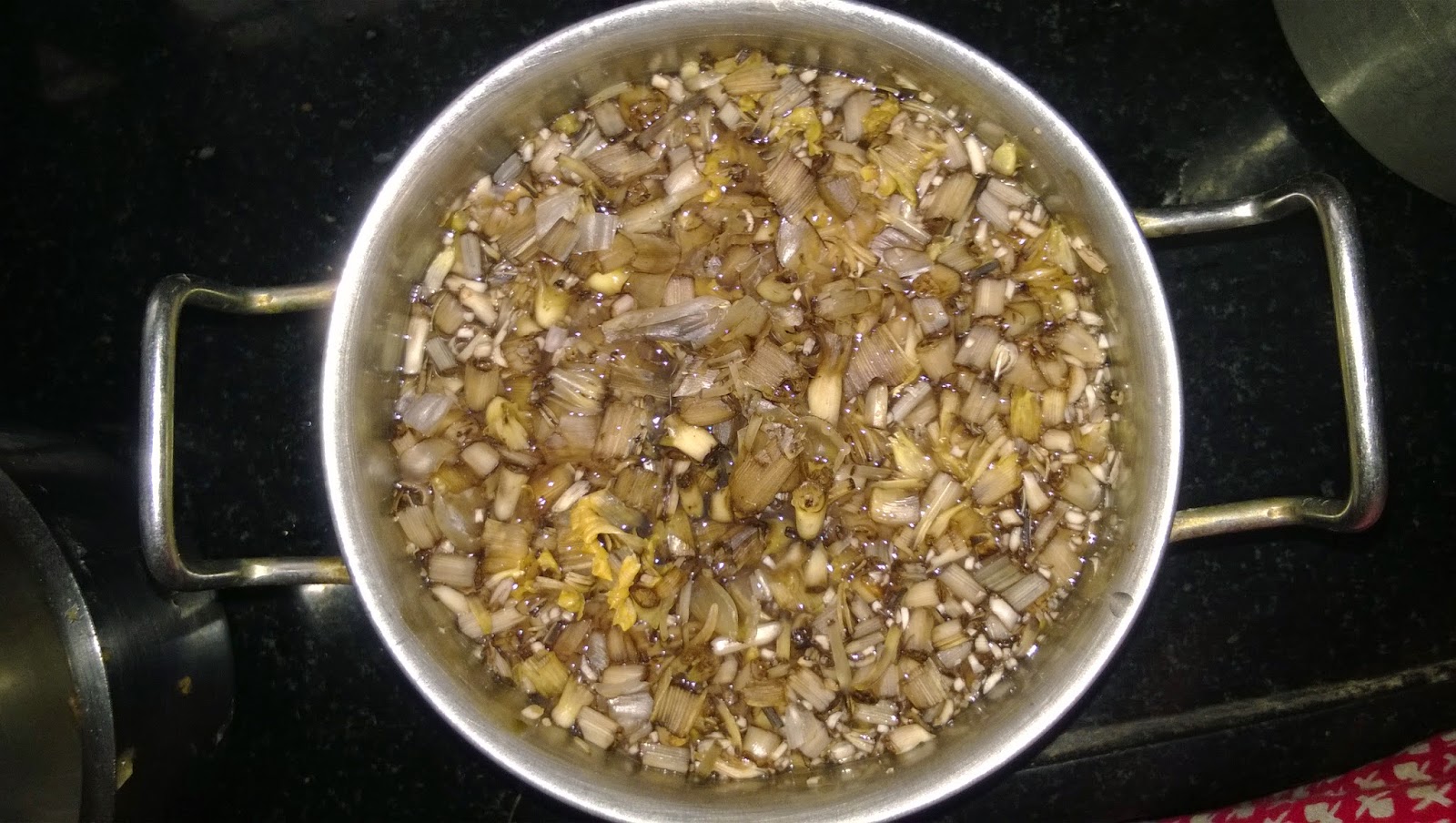 It is a tedious chore to remove the pistil and chop the florets and soak them in acidulated water to which generally butter milk is added. 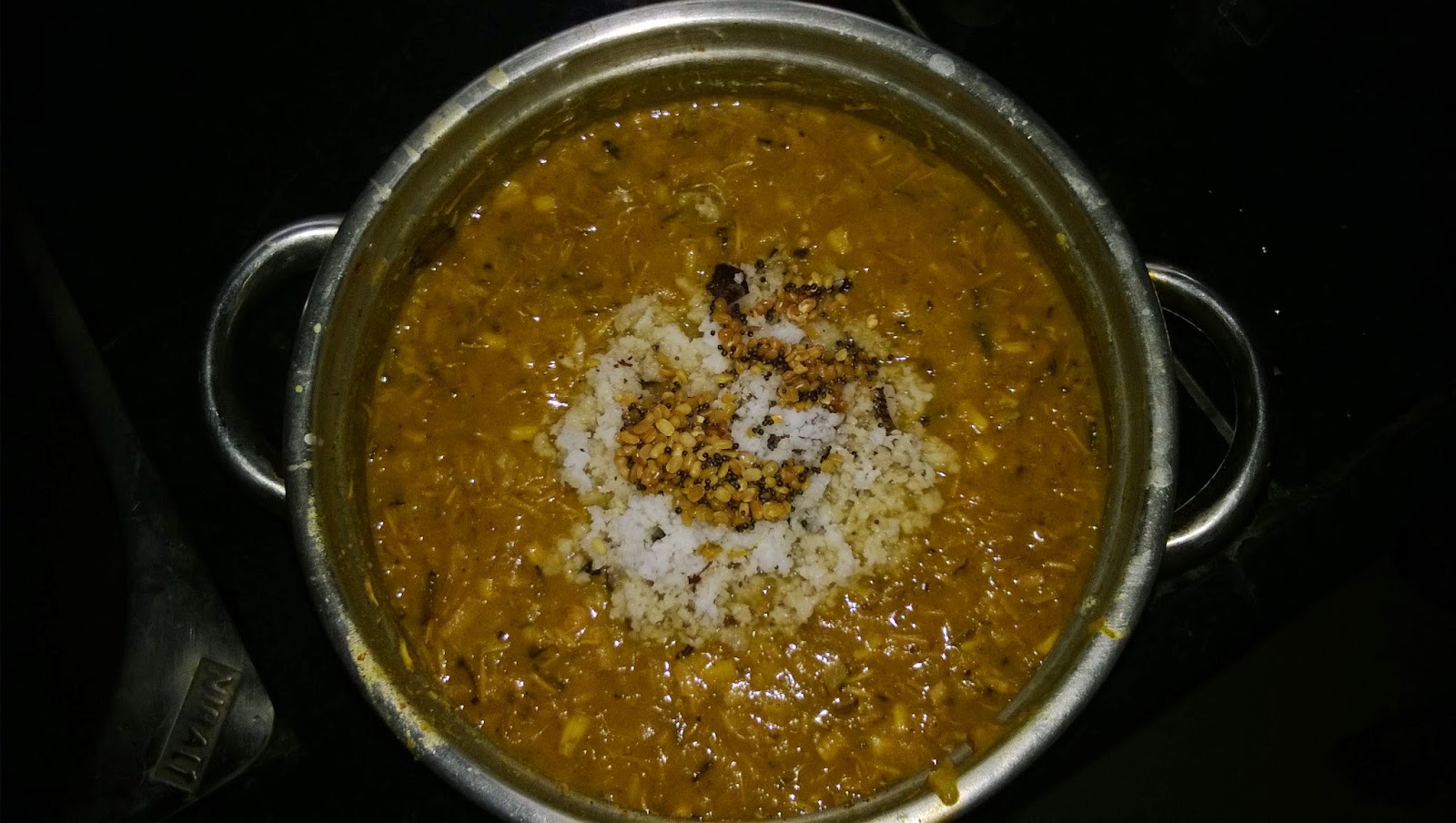 But the medical benefits of the banana heart is immense. Apart from the fact, It can be used for making traditional and tasty foods like  stew (poriccha kootu in tamil)  like above or with dal fry ( paruppu usili)  or like in vazhaipoo vadai ( fried patties) below 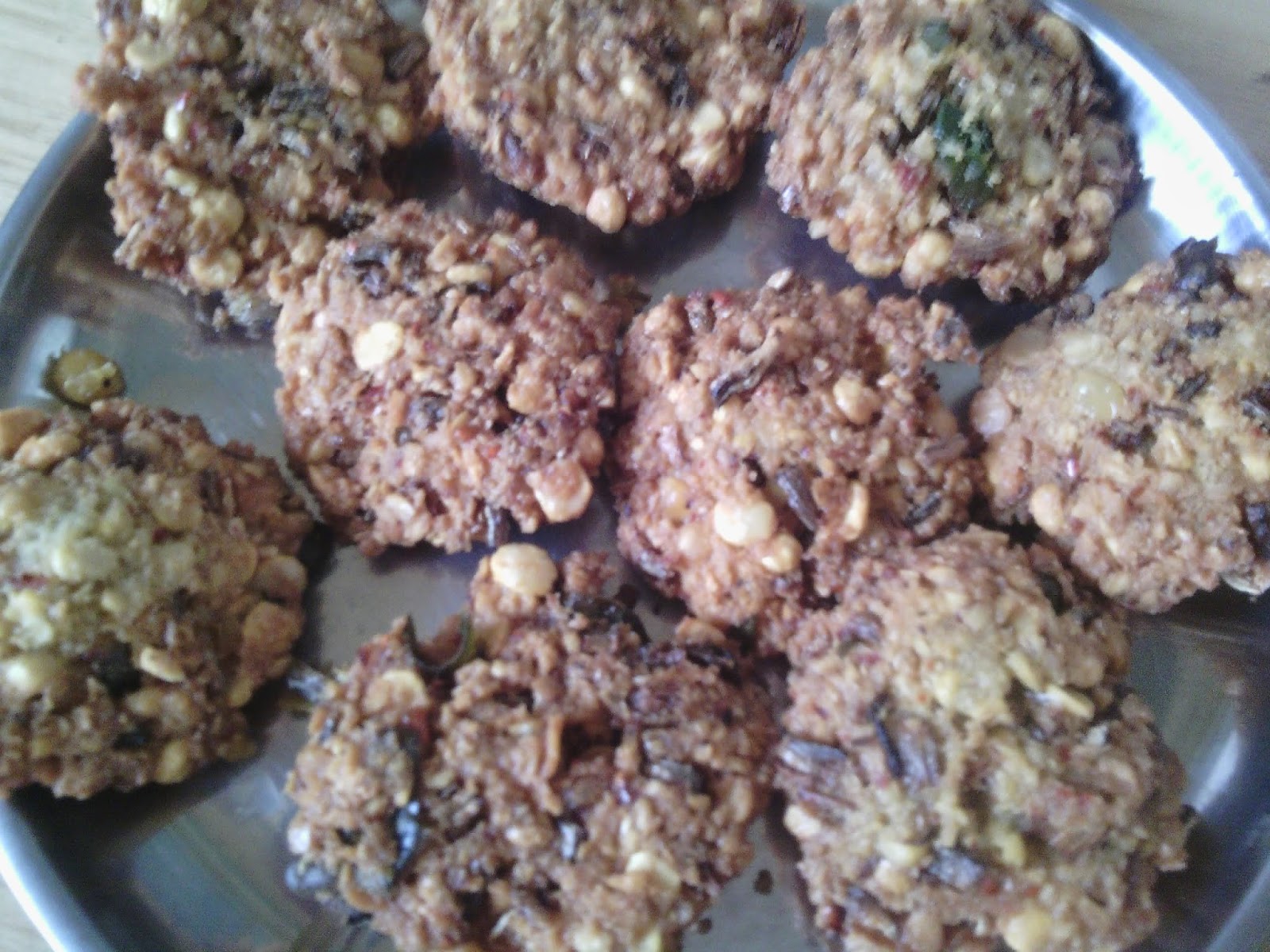 The present day working generation finds it difficult to cook fresh food at every meal and so consume dead food which is refridgerated or preserved with chemical additives. All these, he says creates an imbalance in the food that we consume and reflects on our health in a slow and steady way leading to major diseases.

It is more than many years since I advocate traditional Indian cuisine. SR kishore kumar is not the only one who has inspired me into traditional and conscious cooking. It is also my family elders at my native, who go to the backyard to get fresh veggies and greens like moringa, kafir lime, banana stem, sundakkai, etc.,

Now, I go to the market and look for shimla apples not for the washington apples. I don't get fascinated by the kiwi fruits or the exotic vegetables which have travelled recording many sky miles. I might try them ocassionally but i am not attracted to them any more.

I source and cook the locally grown vegetables atleast during one meal and have  introduced the bitter taste and astringent taste in many of my daily menu. (camouflaged)

Will update more about such health tips from S R kishore kumar when i get to watch his program. Sadly such a resourceful person is not very famous on web and googling about him leads only to my own blog post.