Every parent  wants to raise a healthy and well developed child. So as parents, we ensure and encourage they get the best possible health and developmental care since the day they are born by immunizing and vaccinating the infants against various diseases.  These  early health care  help them in having less chance of getting infected or developing major illnesses as they get older or as they go through life.

In Indian families, we also have the privilege of our experienced elders like nanima, dadima, patti and ajji’s  who are richer in native wisdom to help us  in raising a healthy and well developed child. Most of these native wisdom or traditional knowledge has its roots in one of India’s  ancient medicinal system ‘Ayurveda’.  I  have observed, followed and experienced this science of healing which helps one in keeping fit and healthy.

I strongly believe and practice  home made remedies, granma’s remedies or Ayurvedic remedies when it comes to primary health and wellness issues even today.  To relieve from pains, aches or common ailments like cold and colic pains the various spices, herbs and herbal teas (kashayam/khada) and powders of ayurveda  are my Doctor in need. In days of yore and even now in some house holds like mine, if the child or anybody had cough, they’d mix a pinch of turmeric, a dash of pepper in warm milk or give fenugreek seeds for a stomach ache.

I still remember, night was the time when my children would cry and complain of all those aches and pains   and the clinic was my kitchen.  I have my reasons for relying on this time honored  and trusted practice.

Long long ago, I and my brood  of cousins were born in our Grandparents home at Mylapore(Chennai). Though, we were born in an hospital under a gynaecologist and went to a paediatrician for our vaccinations . Patti(grand mom)  relied mostly on ayurvedic and home made medicines for post natal care of her children,  the  healthy developmental growth of her grandchildren and to treat  the  common ailments and other growing pains.
She also had her older sister  who was a rich source of traditional knowledge, the Venkatramana ayurvedic hospital  on one side and the  herbal apothecary ‘Dabba chetty kadai’* on the other side to aid her.
My  mom often tells me how I would catch cold frequently as a baby and my grand mom used to make vettrilai kashayam( betel leaf herbal tea) and administer it to me through a shell shaped drinking aid called ‘sangu’  in the night and  I would be relieved of the nasal congestion in the morning.
I was 6 years old when my sis was born, and she would always cry of colic pains in the night. She was given allopathic medicines like Piptal by her paediatrician which never stopped her cries, but my  grandmom’s elder sister would burn a piece of dried rhizome over a flame of sesame oil lamp. The ashes of the burnt rhizome  were mixed with honey and given to her and she would sleep peacefully thereafter. The dried rhizome  piece is called Vasambu ( Acorus calamus/Sweet flag) and is a veritable treasure trove used to treat children and very young infants.
This vasambu has many goodness properties  that it is fondly called ‘Pillai marunthu’ (infant’s medicine) in Tamil. It is believed to have a positive effect on the mental development, to relieve colic problems, regulates body heat and bowel movement. It is believed to improve a child’s voice and enhance his or her intelligence.  It is a popular ingredient  for the remedies of cold and cough and other bronchial and respiratory disorders. It is also a good sedative for infants since it has the property to act on the central nervous system. It also acts against flatulence, dyspepsia and vomiting. Overall, a wonder herb that is good for overall good health of body and mind.  In most traditional homes where ayurvedic medicines are practiced,  it is a tradition to insert a gold wire into the vasambu  and rub it against a grinding base stone to make a paste out of it. This paste is then mixed with honey and just a little of the mixture is smeared on the tongue as a daily ritual. It was a ritual at our grandparents place too.
There is no shelf life or expiry date for this dried herb  and so it does not lose its medicinal properties even if it is old. Many  young parents still  tie this with a soft  string around the waists and necks of their children to keep them away from insect bites or make beaded bangles out of it. I still use them in my cupboards to ward off grocery pests since it is a natural insecticide and keeps away insects. 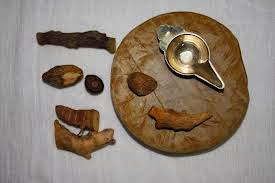 Apart from my parental home experience, my marital home is another  native wisdom treasure, since my husband’s grandparents, grand aunts, uncles have good experience of this ayurvedic knowledge.
Both my children have had oil massage bath with sesame oil (in ayurveda, it is called queen of oils and is the only oil to penetrate all seven tissues) and  pure castor oil as purgative every alternate day. This is done to cleanse the system of the baby which is mostly on milk as food. This is called Rasayana chikitsa in ayurveda.  An oil massage bath first and a purgative later to detox.
Similarly, sesame  oil  which has multi healthy benefits in pure form is also applied over the eyelids and softly brushed over the eyes while giving bath for the kids to ensure a good vision.
Pure castor oil as purgative is administered in little infants to cleanse the tummy of infants from milky wastes.
Apart from the above, Jathikai(nutmeg), Masikai(oak gall), chitharathai(thai ginger), adhimadhuram( liquorice),  ajwain kashayam, jeera kashayam, Tulsi kashayam and many more ayurvedic herbs and teas were used to knock off all those growing and infancy pains /problems in infants, overall development and to ward off major health issues later and build a good immune system.
All these herbal practices were conducted as  certain traditional rituals  and done regularly to ensure a healthy start for the child. Since a healthy start to life encourages good health and wellbeing throughout life.

In many Indian homes, where ayurveda  has been a way of life for the elders  there is a ritual for new borns, where  gold ring is dipped with honey and ghee and rubbed on a new born’s tongue. This is believed to stimulate the brain. Even rituals like piercing of a child’s ear on their ayushhomam( first star birthday) is followed  from ‘Bala chikitsa’ branch of Ayurveda. The room where the baby is kept is sterilized with smoke from medicinal herbs to have sterilized and clean air.   All these rituals have its roots in Ayurveda.
In the last few years, the attitude towards ayurvedic medicine has changed and people are conscious of their well being. India is going back to its roots and leading the world too.
Many people would rather not prefer to get treated for their everyday ills at the neon drenched, swanky corporate hospitals or even poly clinics  that slowly drain their life savings.  Many prefer ayurvedic remedies  and  today there is an awareness  that  herbal medicines are food that cures and are natural materials, most of which are part of our everyday diet.
Infact, new age media  talks effusively about fitness, nutrition and terms like ‘Wellness’,’Holistic’, ‘Spa’, ‘ balanced lifestyle’ and ‘detox’.  All these were known to our elders and were part of their daily life,  though they did not have glamorous names.
So, my strong belief  in Traditional knowledge which leads to natural growth.This post exclusively written for the above prompt from Indiblogger in association with Dabur lal tail. 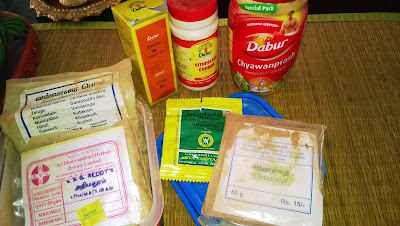 the above ayurvedic products I use for everyday ills

*     - (Dabba chetty kadai is  the  fond name of a small shop which stocks ayurvedic herbs and other spices in small pigeon holed cube like boxes  hence the name ‘Dabba’ meaning box  and chetty is the business community of Tamilnadu, kadai meaning shop. It is  famous for herbs and ayurvedic prescriptions like postnatal medicine, paediatric medicine  and other homemade  ayurvedic drugs and has clients across the globe.  A tiny shop which has defied time is 128 years old and doing brisk business even now at Chennai's Mylapore)
P.S: This was a post which i wanted to write since the last couple of years.  It took a prompt from indiblogger to make a post on this. Thank you Indiblogger and Dabur.
Pic courtesy: Google images, last one is mine.
Posted by Asha at 6:05 AM