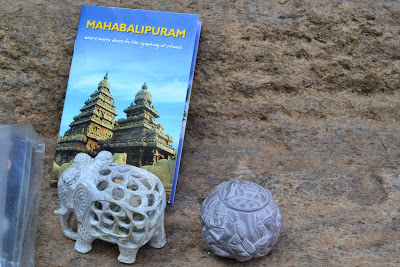 Mahabalipuram - where portraits on sand and stone speak about history and mythology.

Mahabalipuram, once called Mallai kadal/ Mamallapuram  was a famous maritime port of The Pallava kings who ruled from  Kanchipuram in 600 to 750 A.D.  These kings had a flourishing maritime trade  with distant kingdoms of southeast Asia like Cambodia, Malaysia, Sumatra and java. This place today stands as a testimony to the fact that the kings of yore patronized art and architecture. The pagodas, rock cut caves, single stone (monolithic) crafted rathas and bas- reliefs all belonging to the ancient times speak about the riveting legends, their beliefs and lifestyles of  the pallava times. They are a visual treat and speak about the values of artisans in days of yore. They are crafted with faith, love, patience and determination when you had no calipers, T-squares, rulers and other aids to define your geometry and symmetry.

These rich sculptures, pagodas, bas reliefs and rock formations which defy physics has been recognized by UNESCO (1984), thus this ancient village is listed as a world heritage site and that explains why we have many foreign and domestic tourists who are scholars, devotees, artisans,  architects and historians.

I was here on a December morning. I travelled a 55 kms sea shore route from Chennai to reach here. I always picturise a place I visit with the information and pictures available and was slightly disappointed when I found so many colorful kiosks, it did not match with my sepia toned structures against the blue background of sea  which I saw in many pictures and mentally visualized. Lots of cola, gola, candy stores on either side of the road welcomed us. And many caravan stores selling glares, scarves, hats, caps etc That made me realize that today this place is not just an ancient sea port but has transformed into ‘Mahabs’ – a place where people come to chill, hang out, to experience the sun, sea and sand  at the various boutique hotels and bay side resorts and  has became a prime holiday spot . Notably a travel site which I have subscribed to on FB marked this as one of the favorite  year end vacation spot for 2012 along  with Pondicherry.That explained the crowd.

While paying the parking fee, we picked up the brochure/ pamphlet from the  tourist office and took their guidance on the important places we must visit since we had to  pack off in 3 hours time.

We  leisurely  walked around  reading the above monuments but  missed  one – the 5 rathas. Three hours time was very little to feel and read the place, we need atleast one day to go around. We missed the 5 rathas but spent considerable amount of time exploring the street side artisan shops and meeting the artisans who are the soul of Mahabalipuram . At mahabs,  apart form the sound of wind and waves, you can’t miss the ‘tung – tung’ sound of hammer and chisel on stone.

Some captures at the place, 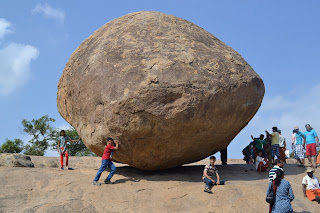 Krishna's Butter ball
It is magical to see a huge rock like this on a buttery surface where standing even for a few seconds is difficult.  This stone has been tried  to be moved by many pallava kings, elephants and even scientists but it has defied physics and stands still. What holds it? no body knows. 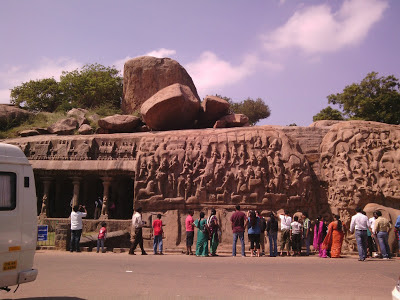 Arjuna's penance the world's largest bas- relief measuring 27mX9m is the pride of the place. It has carvings of celestial nymphs, gods,beasts, birds etc. adjoining is the rock cut cave represented by other 13 caves around. 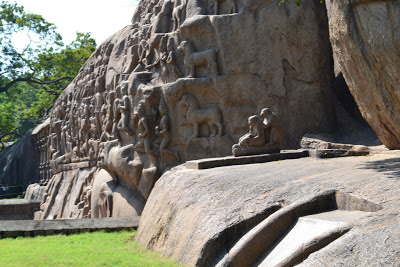 A cross view of the above relief 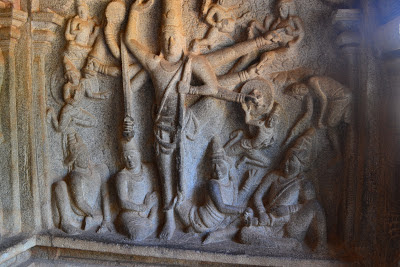 A frame from Varaha cave depicting Vamana placing his third leg on  king Bali'. while keeping one on earth and the other on sky. 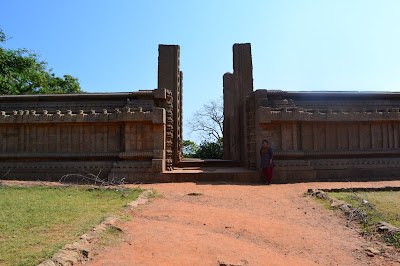 The rayar gopuram or mandapam had beautiful carvings from dashaavatar. This i believe was one of the unfinished pallava project. 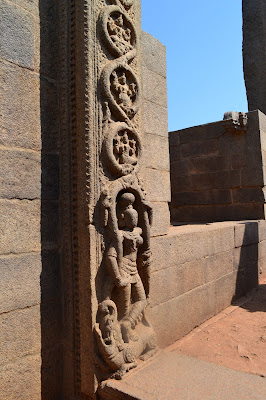 a close up of the dashavatar speaks about the hand dexterity of the artisans. Much of the precision work are not protected by weather, the roughness adds to the antique value of this place. 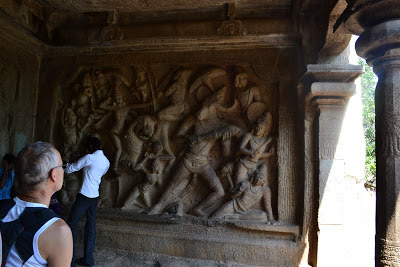 Mahishasuramardini cave -  It was pathetic to hear a guide telling a few foreign tourists " This is Durga, she is a powerful women who sit on a lion and killed rakshasas". I could only see a perplexed look on the tourists. I am sure they would not know who was durga or what rakshasas meant or do they know india and indian mythology better than indians?!  Tamilnadu tourism, train the guides . They are the cultural ambassadors, i believe. Else, history, mythology and culture gets distorted. 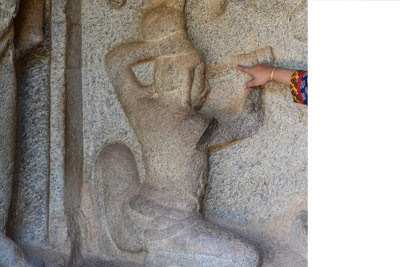 There was a lady guide  who appeared very educated, she was explaining the above relief to a couple of tourists. This was a practice followed in days of yore to show their loyalty to their masters. The men beheaded their heads as shown in the pic by holding their tufts, thus giving way to bali peetams or sacrfiicial altars. A gruesome practice of yore nevertheless beautifully explained by the guide. I found her later traveling in the vehicle of 'The Banyan' organization. so doubt if she was a guide, perhaps a person known to the tourists.  whatever, these places need people like her to appreciate the place. 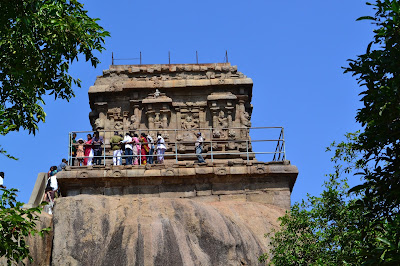 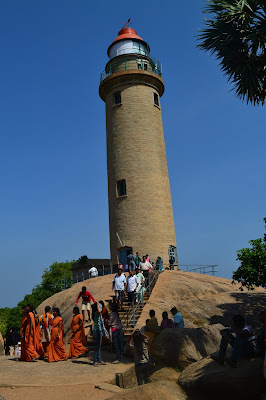 This light house was not built by pallavas. It was built in 1900(?) . This has a steep staircase to the top,  My son's cap flew off his head while he was standing on the platform above at the top. 12 noon is the closing time and we were here at 11.45 making us the last few visitors. The rest were not issued tickets. So i had the window all to myself and clicked the below picture of the shore temple from  the top window (just below the railing). 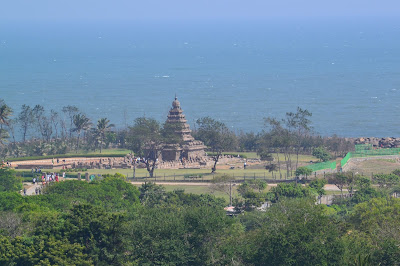 It is on my wish list to see the shore temple at night and capture it. I believe the temple against the moonlight (flood lit night) against the swish of the waves and ink blue sky is surrreal( as seen in movies). One of the oldest temples of India illustrating the dravidian architecture. 6 such temples are submerged leaving this 7th one alone.

A mahabalipuram post is incomplete without stone art and sculpture. It has a stone art museum( i missed it) and a government run college of sculpture and architecture which is one of its kind in India( or only one?). Nowhere else, do we have a college for sculpture in India said one of the artisans. 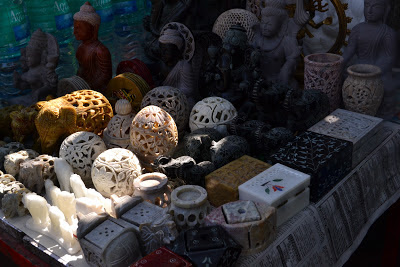 A street full of workshops outside the lighthouse selling stone art like these. I picked up those beautifully carved lampdomes which are eggshaped. They source their rawmaterials like sand stone, marble from places like Rajasthan, cudappah etc. 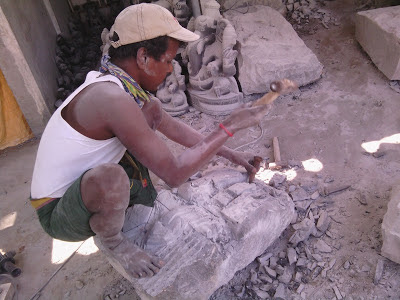 This man was sharpening his tools when i requested him to show how he works, he demonstrated. He has not studied art from a college, but learnt the trade from his father, he belongs to a lineage of stone craftsmen. Perhaps many even trace their lineage to the pallava times. 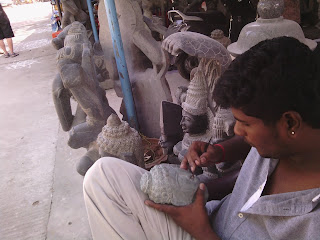 Here is a student of fine arts from government college of sculpture and architecture earning on a spare time during his holiday. Buddha and Ganesha are the most selling idols he says. Many of these graduates on graduating hold their own art shops or fly to foreign shores like Srilanka, Indonesia, Singapore etc., 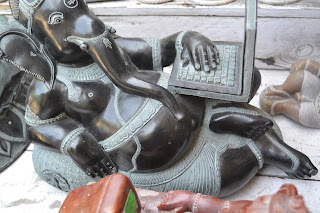 They are icons of art and hold a place of pride in most artistic homes and most foreign       tourists buy them as souveniors.